Talk about waking up to language! This is from Italo Calvino: Letters 1941-1985, translated by Martin McLaughlin, and to be published in May by Princeton University Press. (I will buy it IMMEDIATELY!)

This letter (a fragment of which is below) is believed to have been written in 1969. 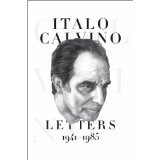 Here is my CV. I was born in 1923 under a sky in which the radiant Sun and melancholy Saturn were housed in harmonious Libra. I spent the first twenty-five years of my life in what was in those days a still verdant San Remo, which contained cosmopolitan eccentrics amid the surly isolation of its rural, practical folk; I was marked for life by both these aspects of place. (…)

You can read the rest of the letter in the April issue of Harper’s!