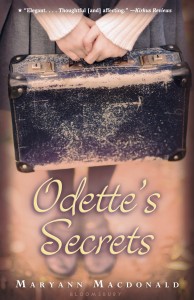 When I lived in London with my family in the mid-1990s, I went to a meeting that haunts me still. A woman spoke about trying to use her dreams to recapture three lost years of her life. As a three-year-old French Jew, she was taken to a small village to live as a Catholic child in the bosom of a large farm family. But she recalls nothing of it. Nothing at all.

But Odette Myers, who later became a poet, professor, and Californian, was nine years old when she was taken to the countryside to hide in plain sight, and remembered it all. Now Maryann Macdonald, author of more that twenty published books for children, has written an exquisite story of Odette’s childhood journey for older readers, Odette’s Secrets.

Amazingly, both Odette’s mother, a member of the French Resistance, and her father, who spent much of the war in in a German prisoner of war camp, survived and the family was reunited in Paris. In 1949,  they came to live in Los Angeles. Odette was educated at UCLA, and then earned a master degree and a Ph.D. at U.C. Riverside. She taught French literature at a number of California universities, including UC Berkeley.

Maryann Macdonald’s story is told in first person, through Odette’s voice as a nine or ten year old child, with an astonishing immediacy in the unfolding story and in the feeling-tone of Odette’s inner life. How could a child make sense of having to leave her parents and to pretend to be someone else?

But Odette — and her voice in this story — is steady, steady, steady. Maryann Macdonald has written in blank verse, to honor the poet Odette. Here’s the Jewish child as she’s taught to pray by Madame Raffin, the mother in the countryside who will protect her:

“At last Madame Raffin is satisfied

that we know the prayers by heart,

that we won’t make a mistake.

She takes our hands and squeezes them for courage.

‘Never forget you are Christians,’ she says.

Your mothers have jobs in Paris.

They sent you to live in my house

so you’ll be well fed and safe.’

I know it will be easy for me.

I an used to keeping secrets.

There is a remarkable essay by the author at the end of the book, telling the story of how the author  found Odette Meyers’s 1997 memoir, Doors to Madame Marie, and the years of devoted research that followed.

Full disclosure: I met Maryann Macdonald when we both lived in London. (She lives in Manhattan now.) I have been following the unfolding of this book. I knew it would eventually find a publishing home, and so it has. This morning I read a 2001 obituary of Odette Meyers, by Alexandra Wall, on jweekly.com. Wall interviewed someone who knew Odette Meyers, and said that Odette “had a certain way of inspiring people to have confidence in themselves.” This is evident in Odette’s childhood voice, brought to readers by Maryann Macdonald with precision and heart. And by the way, I would say this of this wonderful writer herself.