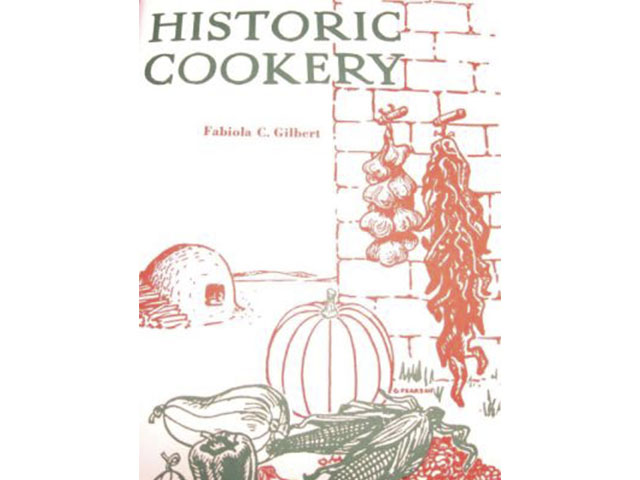 For the sixty or so people lucky enough to attend Santa Fe’s first food conference, we were treated to the thinking of the most astonishing line-up of chefs, food scholars, anthropologists, historians, poets, writers — all addressing, from many points of view, the question of how and whence and where and what — is the cooking of the Americas?

Well. It’s a very big question. But since we were sitting in Santa Fe, the capitol of New Mexico, I’m going to start my reportage of the conference with this cookbook. Fabiola Cabeza de Baca Gilbert, born near Las Vegas, New Mexico — well, her cookbook says in 1894; the New Mexico Historical Society says 1898 — first published her book,  Historic Cookery in 1931. (Her great-nephew, Tom C Baca, spoke Saturday at the conference; I missed it for reasons explained in a moment.)

Ms. de Baca Gilbert had an extensive and important career. She was a home economist, writer, and big-picture thinker. During the Depression, she worked for the New Mexico Agricultural Extension Service. Among her tasks was assisting Hispanic and Tewa women to improve the lives of their families by teaching modern gardening, canning, and poultry-raising techniques along with the operation of the sewing machine.  By the 1950s, under the auspices of the UN, she developed home economic programs for Mexico; she later consulted for the Peace Corps. Ms. C. de Baca Gilbert died in 1991.

According to the 1970 edition of Historic Cookery (reprints from Ancient City Press, P.O. Box 5401, Santa Fe, NM 87502, $5.95), many of the recipes are from de Baca Gilbert’s own family (and yes, she counts the 16th-century Alvar Nunez Cabeza de Baca among her ancestors); others are from Northern New Mexico village families.

In the introduction to Historic Cookery, the author writes:

New Mexico is a land of changes. Its blue skies of morning may be its red skies of evening. There have been changes in its people, in its customs and culture, and naturally its food habits. The recipes in Historic Cookery are a product of the past and present — an amalgamation of Indian, Spanish, Mexican, and American. They are typically New Mexican.

Your experiments in New Mexican cookery can be fascinating. Remember, though, when you try any of these recipes, you should be prepared to spend plenty of time. Guisar, which has no exact English equivalent, is the most popular word in the native homemaker’s vocabulary.  Roughly translated, it means to dress up food, perhaps only by adding a little onion or a pinch of oregano; good food always deserves a finishing touch. Food must never taste flat, but it will — if it’s not guisado.

What a delightful voice.

But what were the raw materials beneath Ms. Cabeza de Vaca Gilbert’s capable and curious hands?

This brings me to the reason why I missed her great-nephew’s talk: I couldn’t be in two places at once.  I was sitting in the audience listening to a panel discussion rather hair-raisingly entitled: “The Big Debate: Local Ingredients, Foreign Chefs, and the Question of Culinary Cannibalism.”

Here’ s who was on the panel:

The discussion began in a rather low-key but assertive way. Gustavo Arellano mentioned anger among some Mexicans at the idea of Americans appropriating Mexican cuisine and becoming rich — witness the career of Rick Bayless. The critics, Arellano said, have the “Americans-are-consuming-our-culture,” point of view — they take and take and give nothing back, according to this view.  But he doesn’t agree. He thinks there is an equitable give and take.

John Sedlar (who grew up in Santa Fe and now lives in Los Angeles) said until he was in his late teens, he grew up thinking Mexican food was second class — but now he sees that Mexican cuisine stands shoulder to shoulder with the other great kitchens of the world. But we couldn’t see it then, he said.

More discussion about cultural and culinary appropriation — and then Jeffrey Pilcher said that ‘cannibalism’ was the right word choice indeed for this discussion.

Wherever Europeans went (in the Age of Exploration), he said, they always imagined the natives to be cannibals. Whenever natives could be classified in that way, they were beyond the pale of civilization. This means, according to this view, that they could be justifiably enslaved.

I think we were all (including the panelists) a bit taken aback — but what an interesting lens through which to look at colonialism. There was more about this practice, but I think I’ll draw a veil over it for now. Except that Pilcher did say that the eating of human flesh never crossed gender lines. (Can’t decide if this is a useful piece of information.)

There’s an element of resistance in the threat, though, Jeffrey Pilcher said — that political radical, Diego Rivera, often threatened to eat someone.

There was a collective deep breath when James Campbell Caruso said he always knew the local New Mexican cuisine was a treasure. It really is a kind of Pueblo Indian cuisine; he thinks the conquered and the conquerers kept their kitchens and traditions relatively intact.

Many chefs took the wrong lesson from Southwestern and Mexican food in the 1980s, Gustavo Arellano said. New Mexican food became a fad, a trend — yet the actual dishes never really made it out of New Mexico. Americans have a taste for basic, working-class food.

Much discussion followed, with John Sedlar saying that New Mexican cuisine, with its high-quality produce, is expensive to produce, while Jeffrey Pilcher spoke about the terroir of New Mexico, its agricultural base and skilled labor, not to mention its current marketing expertise.  Then — talk about the hybridization of food (the Korean taco, for example) and the moveable feast of the great blossoming of food trucks. (On Sunday, Sedlar said: “The taco truck crashed through restaurant walls.”)

Later, chef and writer Deborah Madison, in the audience (don’t miss her amazing Vegetable Literacy, which came out earlier this year), mentioned a Santa Fe restaurant she loved in the 1970s — it was very simple food, she said. And the longer she lives here, the less and less experience she has of real New Mexican food. Remember, she said, black beans were a new introduction to the cuisine by Mark Miller (of the Coyote Cafe).

Finally — and here we return to Ms. Cabeza de Baca Gilbert — John Sedlar said that traditional New Mexican food does not have a large pantry or a large lexicon. What would be the Ten Commandments of New Mexican dishes? It would be a thin list, he said, drawn from the microclimate of Northern New Mexico.

Take a look for yourself — this is an iconic cookbook. (The price can’t be beat.)