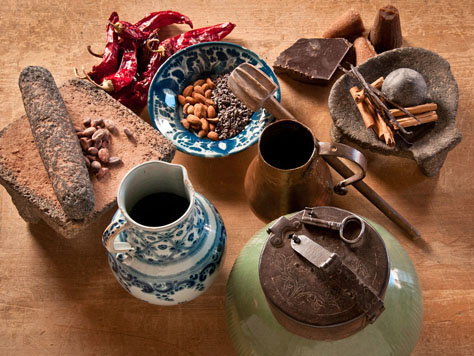 Greetings! I will be blogging and Instagramming all weekend from the first annual FUZE-SW Food + Folklore Festival at the Museum of International Folk Art in Santa Fe, New Mexico, where the topic of the conference will the the past and present folklore and customs that fused to make the fantastic culinary traditions of New Mexico.

Below is information about this photo (by Kitty Leaken) from the Museum:

In this image is a green ceramic chocolatero, from China, 17th c., with locking lid of iron, made in Mexico, 18th c.; a blue and white talavera (chocolate) pitcher, typical to Mexico, 1775–1810; a copper chocolate pot, used for heating and frothing, 19th c.; a talavera plate, with almonds and ground chocolate, 1750–1800; and, a wood molinillo (whisk), late 19th–early 20th c. And, then we have two grinding devices, indigenous versions of the mortar and pestle introduced by Europeans. The bowl-like, stone implement in the upper-right is a molcajete, here filled with vanilla and cinnamon; and, in the upper-left is a flat metate y mano (grinding stone and surface), filled with cocoa beans. Both are late 19th–early 20th c., and were also used to crush cocao beans, almonds, and such spices as vanilla pods and red chili, all shown here, into a powder to make traditional Mexican chocolate.

Long, long before it became a Hershey bar in 1895, a rationed item during World War II, and a antioxidant health food today, chocolate had charmed the cognoscenti, had become so coveted that it was counterfeited, and even caused a revolt.

The cocoa bean, which grows on trees native to Central America, was consumed as a beverage as far back as 1000 BCE by Meso-Americans, who assigned spiritual properties to the drink. Aztecs flavored their xocolatl beverage with chili, vanilla, and flowers; the Mayans also used chili and sometimes maize. Though the flat metate y mano, or grinding stone and surface, in the photograph are from the late 19th to early 20th century, the implements used to make traditional Mexican chocolate haven’t changed much over the centuries; they still are used to crush cocoa beans and almonds (shown on the talavera plate, from 1750 to 1800) and such spices as vanilla pods and red chili into a powder.

Through the centuries, chocolate remained a delicacy reserved for the elite and for religious ceremonies by European royals and New World colonists, but with a twist. The Spanish, having access to diverse fruits and spices, began to experiment by enhancing their chocolate beverage with lavender, cinnamon, almonds, anise, citrus, rosewater, and, with the introduction of sugar cane, sugar.

Though the seasonings changed, the accepted method of preparation did not. From Aztec up until the Spanish colonial period, the correct way to prepare chocolate was to stand while pouring the liquid from one ceramic vessel into another, in order to create a foamy top. The Spanish introduced copper pots and wood molinillos for whisking chocolate into a lather. (Shown is a copper chocolate pot from the 19th century, and a molinillo from the late 19th to the early 20th c.)

As it passed from culture to culture, the cocoa bean remained so valuable a commodity that it was used as currency and trade, from Aztec and Mayan times through the Spanish colonial period when locking jars, called chocolateros, were introduced. The example here is the green ceramic chocolatero, from 17th century China, with a locking lid of iron, made in Mexico in the 18th century. Why the locks? The beans had become so precious that counterfeit dark brown ceramic or pottery beans were sometimes slipped in with the real ones. Originally used to hold spices, these jars traveled from China to the New World in Manila galleons. Later, chocolateros were produced in a Mexican talavera tradition that reflected Chinese influence (note the blue and white talavera chocolate pot, typical to Mexico, 1775–1810).

Though it is believed early European explorers came across the cocoa bean as early as 1493 and soon after took it home, its first documented shipment in Spain wasn’t until 1585. The cocoa bean gained popularity for its alleged medicinal and aphrodisiac properties, and was spread to other countries through the royal courts and entertaining visiting dignitaries.

As use of the bean evolved into the beverage of choice for many, unmitigated passion for the liquid refreshment became a reason for revolt in colonial Mexico. While traveling in Chiapas between 1625 and 1637, the Englishman Thomas Gage witnessed a scandal over chocolate. The local women made a habit of arranging for their maids to bring them chocolate drinks during long church services, a practice that so inflamed the bishop that he forbade the interruption of Mass. When the congregants retaliated by celebrating Mass in convents, the bishop threatened them and the nuns with excommunication. The threat was never fulfilled because soon after the bishop became ill and died … from drinking a cup of poisoned chocolate.

More than a century later, Swedish botanist Carl von Linné gave the cocoa bean a new and perhaps more appropriate name: Theobroma cacao, meaning “food of the gods.” By then, food fit for gods and consumed by mere mortals had been introduced to England and had found its way back across the Atlantic to British colonies in North America, where its popularity continued to grow. In New Mexico chocolate remained the chosen beverage until the Santa Fe Trail and westbound railroads brought more people and, with them, coffee and tea.