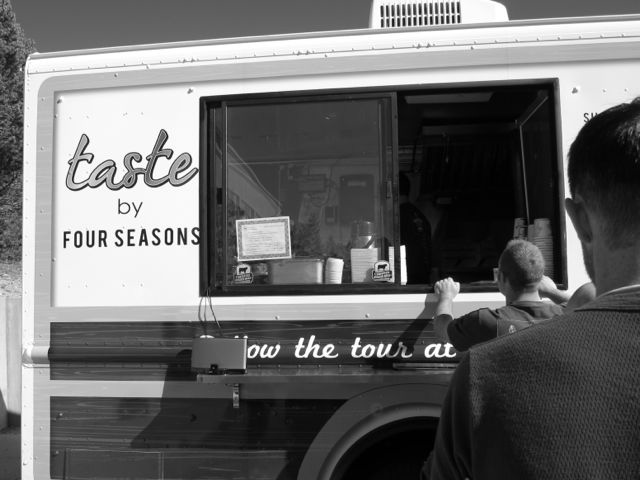 (This is the second of my whacky and wildly incomplete posts on the FUZE-SW Food + Folklore Conference in Santa Fe, held Nov. 8-10 at the International Museum of Folk Art.)

Here is what we had for lunch on Saturday, November 9:

Here is a description:

The exhibition tells the tale of the earliest cultural mestizaje (mixing) to take place in the Americas through foods originating in the New World, and foods brought from Europe via Spain, Asia, and the Spanish Manila Galleons. Several sections highlight specific food items; chocolate and maté, for examples, and trace the origins and histories of these two popular drinks. More than 300 objects related to food harvesting, preparation, table settings, kitchen items, and utilitarian and decorative implements are also on view.

Nicolasa M. Chavez, curator of this joyous exhibit, took groups of us through it. (She is the curator of Latino/Hispano/Spanish Colonial Collections at the Museum of International Folk Art.) She is a 14th-generation New Mexican. She is brilliant, beautiful, animated — and, when I tried to snap a photo of her, all I got was . . .

This is because Ms. Chavez is also a flamenco dancer. She moves like the wind.

And here is the other:

But before I add to the zillions of boring lunch reports (no matter how worthy the food) in the blogosphere & elsewhere,  I must introduce you to:

Patricia L. Crown, distinguished professor of anthropology at the University of New Mexico. She spoke to us for fifteen minutes shortly before lunch. She was wonderfully dry and witty. First thing, she asked: Do you wonder what archeologists think about food?

Well, she said, we like it.  And, she  also said, with her wry look, people have always had it.

She had my attention.

Well, how does an archeologist go about figuring out which foods people ate and how they were prepared?

We look for, she said: pollen; macro-botanical remains; fauna (animal bones and evidence of butchering); food processing tools; containers for (possibly) storing food; utensils; human skeletal remains; teeth (starch remains in plaque); and then, there’s the study of isotopes in skeletal remains which can show how much meat was consumed, or if someone grew up in the same place where they were found.

(Oh dear, I’ve lived in too many places. My bone isotopes would only reveal confusion.)

At any rate, Dr. Crown’s specialty is ceramics.  Actually, in this case, ceramics from one ruin in Pueblo Bonito. More than a century ago, scientists who preceded her found 180-190 cylinder jars in this spot. What were they used for? They were not found outside the Chaco Canyon sphere.

So here were the theories:Canyon

2. Hand drums (missing the skin on top, of course)

3. A sort of pressure cooker for carrots

So Dr. Crown had a chat with a colleague, who was an archeologist specializing in Mayan ceramics. What were the Mayan cylinder-shaped vessels used for? Her colleague replied: Chocolate.

How did she know? Well, it’s written on the jar.

But she ordered up some organic residue analysis for the Chaco jars.

Dr. Crown had identified the first prehispanic cacao north of the Mexican Border. Right there in Chaco Canyon.

Dr. Crown said a lot more interesting things about anthropologists and food containers, and about the history of cacao.

But this is a blog post, and I’m told they are supposed to be short because no one has an attention span beyond a minute or two anymore, so you can look up the history of chocolate if you are so moved.  But in 1502 when some conquistador-ish soldiers first found the beans, they thought they were disgusting. The drink gave them (men) red mustaches and they (the men) thought they looked like animals. You may want to look it up.

The proof of the pudding:  Along with ordering chilaquiles for what would be breakfast and lunch (so delicious), there was no way to pass up the chile-spiced Mexican hot chocolate. No way.

It was ambrosia. Made all the richer for the story.