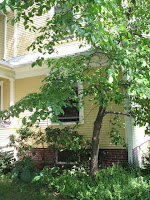 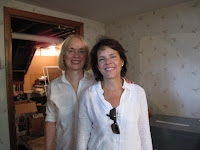 These are my dear friends, the writers Maryann Macdonald (light) and Patricia Marx (dark). They are standing in a miraculous place — the damp, underground (o.k., basement) room where Marilynne Robinson wrote one of the great novels of the late 20th-century — Housekeeping.

Maryann and Trish, who live in Manhattan, visited me in Northampton, Mass. this weekend, where we have a beloved home, usually rented out. A few years ago I learned that Marilynne Robinson had lived on our street (Massasoit) with her then-husband and children and had written Housekeeping there, in a room in the basement. The kind current owners of the house invited us in to see where this act of faith and art had taken place.

There is a single window where one can peer out to see the lawn and a few shrubs, but that’s all. At least she was able to see some natural light, and rain, and, of course, snow. (Snow and rain figure prominently in the novel.)

Housekeeping is a novel that encourages you, teaches you, admonishes you to be one hundred times more alive than you were before you opened its cover.

This, from page 13 from my Picador paperbound edition:

The years between her husband’s death and her eldest daughter’s leaving home were, in fact, years of almost perfect serenity. My grandfather had sometimes spoken of disappointment. With him gone they were cut free from the troublesome possibility of success,, recognition, advancement. They had no reason to look forward, nothing to regret. Their lives spun off the tilting world like thread off a spindle, breakfast time, suppertime, lilac time, apple time.

The book was published in 1980; I read it for the first time in 1988 or so; I lived on Massasoit Street for four years before I ever knew she had lived in Northampton at all.

Writers, look at that basement window and know any- and every- thing is possible.