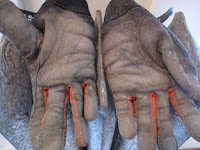 Not sure how it happened, but I have a three-thousand-mile garden. One part is in Northampton, Mass., the other, much smaller and less labored over, is in Los Angeles. Please don’t ask where in Los Angeles — it’s in the city, close to the middle of the city, between downtown and the beach. (People in the East seem to think “Los Angeles” is synonymous with “Southern California.”)

The essential difference between the two parts of the garden can be summed up in one word, one element: water.

I’ve watched more rain fall in the summer of 2009 in Western Massachusetts than I have in four years in Los Angeles. About 15 inches! Rivers are high, high, like snow-melt high.

Water rationing, long overdue, is now the law of the City of of Los Angeles, and my handkerchief-sized lawn, so I’ve heard, is blighted. Containers festoon the small front porch, though, each each plant surviving on plastic-tube life support.

But here in Northampton this summer, my new gardening gloves are caked with mud. I love to garden in the rain, and then to come into the house muddy and soaked. What could be better? The wet summer allowed me (and some helpers) to restore a neglected garden. We moved a tree, removed a tree, pulled up a boatload of liriope by its roots, moved and divided so many perennials the the list would bore. Gave away many hostas. Never really liked them. Moved a big pink-blooming rhododendron from the back yard to my neighbor’s side yard. Root ball must have been 150 pounds. Fun though. (I was the helper on this one, to young arborist Jeremiah Woolley — have you ever heard a more New England-ish name?) The rhodie has a beautiful shape. I can see it now, from the dining room window.

My neighbor Sue likes to garden in the rain. Her husband Steve too. Wonderful, laboring in the rain, calling back and forth from garden to garden.

I’ll return to Los Angeles at the turn of September, the hottest month of the year there. It will take some adjustment. I will dream of my New England garden when leaves fall, and again when it sleeps under snow.