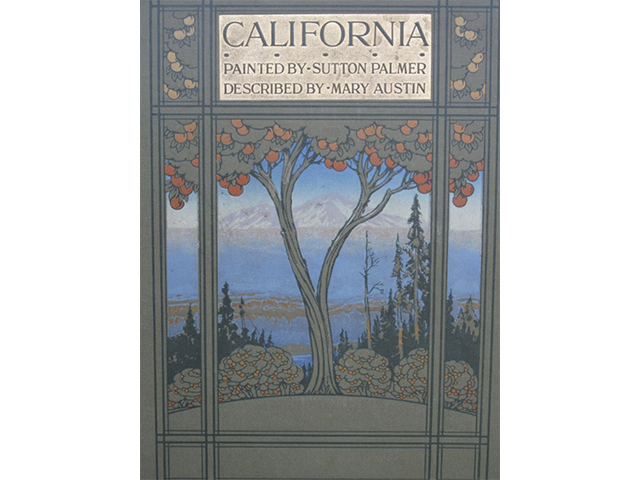 Mary Hunter Austin was a real California girl. She was born in Illinois, came to California at twenty, lived for years in New York, and died in New Mexico. But her literary mark on the California landscape is indelible. Her first book, Land of Little Rain (1903) was the first real (and really beautiful) praise of the natural world and the Native people of California. She was writing about the Owens River Valley before the small town of Los Angeles took its water. The rest is history, of course.  (A few more details:http://www.pacifichorticulture.org/articles/still-the-land-of-little-rain-mary-austin-and-the-eastern-sierra/)

In 1914, MacMillan published a beauty of a book, called California: The Land of the Sun. “Painted by Sutton Palmer, and Described by Mary Austin.” Sutton Palmer (1854-1933) was an English landscape watercolor painter and illustrator. He lived in London but painted throughout his country, and in Scotland. How did he get here to paint the places of Mary Austin’s book? I don’t know. But I hope to find out.

Here is the cover of the American edition of the book: 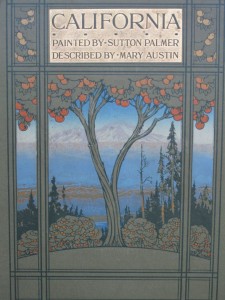 Oh, I wish you could see this embossed cover. It is actually much more of a sage green, with the title and so forth embossed in gold. The oranges to the left and right of the panel are gold too; the rest of the oranges are true to their name. There are 32 separately printed watercolor images in the book, tipped in, and a small fold-out map at the end. The image of Glendale, Calif. is just stunning, and heartbreaking; herein you can see what has been lost in the last century: 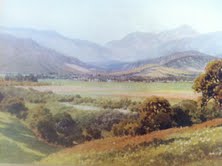 Mary Austin was a poet of the landscape. Here’s part of what she wrote about Southern California mountains:

Sometimes the mere mechanics of the land, the pull of the wind up the narrow gorges as you pass, advises the open mind of the power and immensity residing in the thinly forested bulks.

She did value the open mind. And most of all, she valued beauty. This is what she had to say about the San Jacinto Mountains, from which I write today:

San Jacinto —St. Hyacinth—was he ever anything but a Christianized memory of a Grecian myth — or does it matter at all so long as there are men to see, in the deep purple light that dies along the heights, the colour of blood that is shed for love? Perhaps the best thing beauty can say to Greek or Christian is that there are still things worth dying for.

This is the 11th post of the series, Mountain Stories. Copyright Paula Panich, 2013.