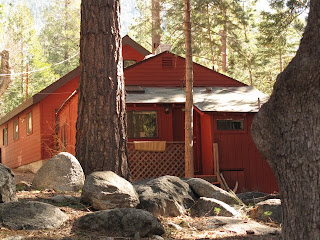 For exactly three years I have been spending time in Idyllwild, Calif., in the San Jacinto Mountains, above Palm Springs. It is my escape from the Los Angeles overload of traffic, people, buildings, concrete, hurry, noise, daycare-next-door, hovering helicopters, hysteria. For two-and-a-half of those years, I have rented a little cabin in the woods, near Idyllwild. My landlord’s father built it in 1941, from a Sears kit. It was originally a garage. Over the years it has housed a car or two, a tinkerer’s workshop, and for one long winter, a carpenter who, in exchange for shelter, fitted more cabinetry in 400 square feet than is imaginable. There is a kitchen with a full-sized stove and refrigerator, a bathroom with the usual amenities, plus a shower. Heat comes from a cast-iron gas stove.

I actually live on 193 square feet. (I know this because I had the carpet cleaned.) On this square footage I have a double bed, small square bedside table, desk, rolling desk chair, four-foot rectangular table with two old white-painted bentwood chairs, and a small chaise from the 1940s, impeccably upholstered by its penultimate owner in two-toned striped pink silk.

It is my writing shack. In it I have written several pieces for the Home Section of the Los Angeles Times, a couple of pieces for Pacific Horticulture, a piece for Wildflower Magazine, and a talk on the early California feminist and naturalist, Mary Austin. Other things, too — many letters, innumerable notes. I’ve read books, lots of them. But mostly, when I’m in the shack, I think. And when I’m lucky, I don’t.

My landlords’ cabin is next door. A creek runs behind us. Windows open, I can hear its sweet music.

2 thoughts on “Mountain Stories: Cabin in the Woods”