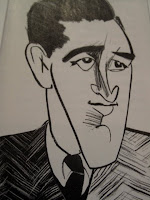 Franny and Zooey, J.D. Salinger’s third book, was published in 1961. The the two long stories had been published previously in The New Yorker, in the Fifties.

I had a hard-cover copy. I suspect I had requested it as a Christmas gift. I was in the eighth grade; I can’t imagine where I had heard of it. The New Yorker was unknown. No books in the house of my youth. I had schoolbooks. I used the library.

I wore my hair in a long bob that required sleeping in painful brush curlers. I loved clothes, and boys, and peacock blue ink, which I spilled on the hall carpet. I loved Franny and Zooey above all else. I had never been to New York, known anyone who had been near Yale or Princeton, in fact barely knew any adult who had gone to college at all. But that Glass family. Were people really like that? And could someone really tell stories like that?

Read the three essays in this week’s New Yorker, in “The Talk of the Town” section, one of them by Lillian Ross, a memoir of her fifty year friendship with the writer. (http://www.newyorker.com)

But don’t miss Adam Gopnick either:

“Writing, real writing, is done not from some seat of moral judgment but with the eye and ear and heart; no American writer will ever have a more alert ear, a more attentive eye, or a more ardent heart than his.”