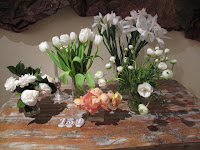 My forty-year affair with Chekhov began innocently enough, with the plays. Perhaps it was The Cherry Orchard. Not quite sure. But when I read his short stories, and then the letters — oh those letters — no retreat was possible. He was mine.

We had a 150th birthday party for him here in Los Angeles, on January 17. Twenty people; herring, beet borscht, stuffed peppers, chicken paprikash, a zakooska table with piroshki, pickled everything, and sour cream above all. Shots of vodka, Russian champagne. Desserts with sour cherries, apples, poppyseed.

(Russian sour cherries are small, and tart. Chekhov liked to eat them by shoving five or six in his mouth, juice running.)

We might have bored him. But — we had gardeners in attendance. Gardening was his great passion. That cherry orchard was just the beginning.

I read his story, “Fish Love” aloud. Short, and witty. Rain was falling. We could hear it through open windows.

Through the window could be seen grey sky and trees wet with rain; since there was nowhere to go in that kind of weather, there was nothing to do but tell stories and listen.