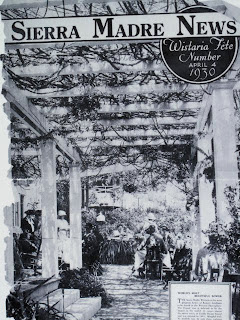 In Sierra Madre, California, they say wistaria. And they think they’re right. For close to a century, Sierra Madre has celebrated their vine, one of the seven horticultural wonders of the world, in March, when it blooms in all its glory.

In 1918, during a fundraiser for the American Red Cross, 12,000 people showed up to bask in its pendant lavender beauty.

And so it was yesterday, March 14, 2010. Only now the vine, Wisteria sinesis, covers an acre, weighs 250 tons, and has its place in that book I don’t have to mention as the world’s largest blossoming plant.

The vine started its Sierra Madre life in 1894 from a one-gallon pot purchased from the Wilson Nursery in Monrovia, for seventy-five cents. Alice Brugman is said (and said again and again) to have traveled by horse and buggy to fetch it.

The vine eventually collapsed the house, but Mrs. Brugman, a true plant fanatic, just built another nearby.

The gorgeous trellised vine now spans the yards of two lovely homes, whose owners are obviously game enough to allow about 7,000 people to traipse through their yards one day a year.

Here’s what a visit looked like eighty years ago. Is it possible that the three people who appear in my version of their lives (in my new novel, Missing Meg) were among the guests?

It’s Southern California. Anything is possible, including the vibrant presence of the world’s biggest flowering plant.

By the way, the botanical name for this plant of Chinese origin is taken from Caspar Wistaria (1761-1818). So: Sierra Madre is right.