If winter in the Northeast is, horticulturally speaking, the time of Persephone, we were thinking about where to go for a respite from the cold and a chance to learn more about plants. Botanic gardens and museums near and far are a good start.
Now that Southwest Airlines is flying to the Southwest from Providence, Rhode Island, Manchester, New Hampshire, and — beginning on October 31 — from Bradley International Airport in Hartford, Connecticut, Arizona seems almost as easy and cost-effective to get to as Florida. Well, not quite, perhaps, but the Sonoran Desert is a very good place to visit in winter.

Sunrise on the Sonoran Desert (Photo by Terrence Moore)

Phoenix, in the Salt River Valley, is in USDA Zone 9 — but it is a rather odd Zone 9. Extreme summer heat and an appalling lack of water for cultivation finally drove away the Hohokam people around the year 1400, after they had been there for 1,600 years. Their descendants, the Tohono O’odham and Pima peoples, emerged around the year 1700 and lived peaceful, agricultural lives, although on a smaller scale. It wasn’t until Anglo-Americans came looking to make their fortune in the late 1860s that this part of the Sonoran Desert began to sustain another growing population. The problem of water had to be solved anew. In 1867 the first irrigation ditch since the time of the Hohokam snaked its way through the valley.
This ditch spawned an agricultural revolution as well as other irrigation ditches, and by the end of the century, thousands of acres of alfalfa, wheat, barley, and corn were under cultivation. Impressed by this agricultural miracle, pioneers built houses and landscaped them with thirsty non-indigenous trees and lawns.
An extreme drought a century ago sent many farmers and homesteaders fleeing. But the federal Reclamation Act in 1902 brought hope to the Salt River Valley and the rest of the Arizona Territory (statehood wouldn’t come until 1912). Water reservoirs were built, and the U.S. government bought the valley’s private canals and organized them into one system.
With the completion in 1911 of the Roosevelt Dam 80 miles east of Phoenix, the greening of the desert speeded up. Citrus, date, and olive groves were added to other crops, and Phoenix was planted with fig, ash, pecan, maple, eucalyptus, and other trees never intended for the desert. The central core of Phoenix was no longer a desert at all.
The greatest boom in the two major cities of Arizona, Phoenix and Tucson, came after World War II, with the advent of air-conditioning. But the populations grew and grew — and soon Tucson, with its 12-inch annual rainfall, with a million people, was the largest city in the country at the mercy of pumped groundwater for its survival. Phoenix gets 7.8 inches of rain a year, and depends on 1,265 miles of canals and a complex of four dams on the Salt River and two on the Verde River to supply 75 percent of its water. The rest comes from the Central Arizona Project (CAP), a giant canal that brings water to Maricopa County (the huge county where Phoenix is located) and to Tucson, which cost somewhere close to $4 billion.
A decade or so ago, when Arizona’s beloved statesman Morris Udall was alive, he said: “If I could turn the clock back fifty years and do it all over again, instead of spending $3 billion for a water plan that would let Tucson grow and turn Phoenix into another Los Angeles, I would have suggested we take land by the Colorado River, where we have the water, and build ten cities the size of Yuma [population 60,000].”
For the visitor, there’s a lot to forgive in Phoenix. The traffic is dreadful, downtown is mostly sharp-edged, and airport car-rental agencies gouging. Yet the winter weather is perfect, pools are an ideal temperature, restaurants are wonderful, and if you’re inclined to golf, you can play until you drop. The arts flourish here, and a generation of landscape architects and designers have, for the past two decades, been composing with native plants to great effect. Native plants can be lush, too, with a little more water than the scant rainfall provides. Not only are native plants cost-effective and water-saving, but they also attract pollinators and predators and tap into the food chain, bringing even more life into the landscape. This may seem obvious to people who live with much annual rainfall and a high water table, but the people who settled these desert towns were people from New England and the Middle West, and what they wanted in their gardens was much what most everyone else wants — things that remind them of home.

The first essential stop for the Phoenix visitor is the Heard Museum in downtown Phoenix, probably the premier private ethnographic museum in the country. Built in 1929 to house the Heard family’s collection of Native American artifacts, the Heard has grown over the years to be a major museum, most recently completing a two-year expansion in early 1999.
The Heard Museum had its back, so to speak, to the city for 70 years with a curving wall along Central Avenue. When the museum was built, its small-scale entrance along Monte Vista Road was more than sufficient, and the building was in tune with the residential nature of the neighborhood in scale and style. It was the time of the Spanish Colonial Revival, and the red-tile roof and graceful arches of the museum became a Phoenix landmark. But seven decades, a million and a half people, and a rapacious real estate market later, the character of the city has changed dramatically.
“The historic entrance to the museum on Monte Vista is really a period piece,” said architect and landscape architect John Douglas recently, sitting in the shade of the new courtyard at the museum, sipping an iced tea.

What Douglas, the chief designer of the recent expansion, meant was that the well-established plantings around the Monte Vista neighborhood are lush and non-indigenous, requiring much water and maintenance. Around the corner on Central Avenue, the main thoroughfare downtown, the city adapted a 4.5-mile native-plant streetscape plan.
John Douglas’s landscape plan for the Heard Museum has allowed this beloved institution to give a gift to the city — a lovely large open space and a subtle amphitheater in a mostly native-plant xeriscape that will nonetheless mature into a lush space.
That a serene environment can exist once more in this hard-edged and mirrored urban core is astonishing. The museum itself is set back 400 feet from Central Avenue; palo brea trees, planted up and down Central Avenue as part of the city’s plan, are here too. The low-grade, elegant spiraling amphitheater (a separate design project of Design Workshop of Tempe) fills most of the space in between. Desert mesquites are planted along the perimeter of the space — fast-growing trees that will reach 24 to 30 feet in three to four years. Perforated screen walls front the new section of the building, and at night they are lit from within like a lantern — another gift to the city.
“This is a new experience for the giant city that’s here now,” said Douglas, as we now stood near the edge of Central Avenue with its whizzing cars, admiring the human-scaled miracle of urban open space.
The Heard Museum houses a stunning collection of more than 32,000 works of art and ethnographic objects including works of contemporary Native American fine arts. Its collection of Hopi Katsina dolls is unparalleled, much of it donated to the museum by Barry Goldwater. This is the place to begin to understand the shaping of culture in the Southwest. Coming up at the Heard Museum: “Powerful Images: Portrayals of Native America” (11/13/99-3/19/00), an exhibit portraying the intersection of pop culture and Native American art. On March 4 and 5, 2000, the 42nd Annual Heard Museum Guild Indian Fair & Market will be held, which is not to be missed. You can see Native American dancers in that lovely new amphitheater.
The Heard Museum is open from 9:30 a.m. to 5:00 p.m. daily except for major holidays. For recorded information, call 602.252.8848. Visit John Douglas at www.douglasarchitects.com and the Heard Museum at www.heard.org. 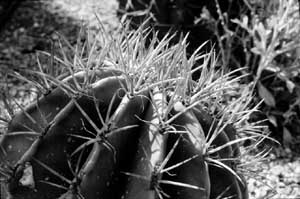 To put this revered institution in perspective, it is helpful to consider that, like the Heard family’s desire to preserve some of a vanishing Native American way of life, the fledgling Arizona Cactus and Flora Society was likewise pulling against the tide. With 700 plants collected by a single individual, the group broke ground for a “clubhouse” in 1939.
With wartime gasoline rationing, only a few volunteers were able to travel to the garden to water, and much of the garden didn’t survive the war years. But in 1947, thanks to a willed trust, the garden began to grow anew.
The Desert Botanical Garden conserves the desert plants of the world (with a special emphasis on the succulent plants of the Southwest) and displays approximately 20,000 plants representing 4,000 taxa in a 145-acre garden on the border of Scottsdale and Phoenix. The Desert Botanical Garden has the world’s two best-documented succulent collections, and one of the world’s most extensive seed banks.
A special conservation collection preserves 250 rare, threatened, or endangered species from the southwestern United States and northern Mexico.
The Luminaria Walk, December 2, 3, and 4, 1999, is the Desert Botanical Garden’s annual winter event, when the paths and walkways of the garden are lit with candles, and visitors are, without fail, intoxicated with the beauty of a desert night in winter.
The Desert Botanical Garden is open daily except for Christmas Day. Winter hours are 8 a.m. to 8 p.m. For information: 480.941.1225 or 480.941.1217. Visit its site at www.dbg.org.

Montréal’s Botanic Garden, exceeded in size only by Kew in London, offers The Wonders of Wintertime from December 21 to March 20. Its extensive greenhouses are open all winter; in the Chinese Gardens (from January 29 to February 21) will be the Harbin Ice and Lights Festival, where glistening translucent ice sculptures will be lit up at night, and mazes and slides sculpted for children. I love the following description of the “Butterflies Go Free” show in the Tropical Plants Greenhouse: “Take a trip to the tropics and admire graceful butterflies as they flit about in the midst of a Quebec winter. It’s the perfect way to beat the winter blues.” The show begins on February 26 and ends March 21, 2000.
Jardin Botanique de Montréal, 514.872.1400.

The Orangerie at the Tower Hill Botanic Garden, an 18th-century-style greenhouse, opened in February 1999. It looks like a fine place to spend a winter’s day, in 4,000 square feet of thriving plants. There is a canopy of four palms; citrus trees like Meyer’s lemon, Dancy tangerines, and Persian limes; and an understory of shrubs, perennials, annuals, and bulbs. See the Calendar page for classes and special events at Tower Hill.
Tower Hill Botanic Garden, 508.869.6111; www.towerhill.org.