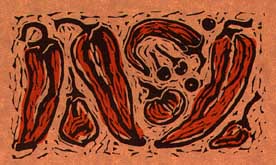 Tohono Chul is a 48-acre botanical garden in northwest Tucson, Arizona. The name, in the language of the Tohono O’dham tribe of southern Arizona, means “desert corner.” The Santa Catalina mountains loom in the near distance; the garden is an oasis in a busy, growing city.
In a corner of this corner of the Sonoran Desert is a small ethnobotanical garden, and it is here that a sharp-eyed visitor might see the delicate low-desert bush called the chiltepín. In the early part of the year, the plant is festooned with tiny red berries perhaps a quarter of the size of cranberries.

Yet before you imagine these berries tarted up with sugar and lemon peel, hold on. The innocuous-looking chiltepín is, in the words of naturalist Gary Nabhan, the “red-hot mother of chiles.”
The chiltepíns at Tohono Chul were started from seed from plants in Tumacacori in southern Arizona, near where wild chiltepíns mark the northern edge of the world’s wild chile populations.
Capsicum annuum var. aviculare: Look at it as the little bush that shook the planet. Once 15th-century Europeans tasted of this exotic culinary fire, all hell broke loose. It is tempting to hold the chiltepín and its cousins on the subcontinent and in Southeast Asia responsible for the development of sophisticated navigation, the flowering of the Renaissance, and the swashbuckling of Elizabeth’s sea dogs.
If that seems too far-fetched, perhaps the chile is responsible for the well-being and friendliness of the people of the Southwest — it’s not just those mild winters. Those hot chiles in your green corn tamale aid in the release of the body’s own opiates, the endorphins, in response to fire on the tongue and in the gut.
The wild little chiltepín and its relatives conquered and colonized the world, for the chile in its myriad forms is eaten in larger quantities and by more people than any other condiment. The chile is the real connective tissue of humanity.
Capsicum annuum is the best-known domesticated chile species in the world, most likely because it was the first pepper found by Columbus and other New World adventurers. The “warm-weather exotics,” in the words of food writer Raymond Sokolov, were spirited onto ships and transported “to the land-locked icebox” of Europe, where they quickly became the hot ticket on Portuguese and Spanish trade routes. Sokolov opines that fires were lit under Indian and Sichuan cuisines because the Portuguese brought capsicums to their colonial possessions Goa and Macao.
One of the mysteries of my childhood was the hot pepper-eating, followed by the momentary misery, of my paternal grandfather, born in the Voyvodina region of Yugoslavia near the Hungarian border, more than a century ago. So how did hot peppers reach southern Europe? Sokolov offers a compelling theory. Capsicums were brought to their far-flung empire by the Ottoman Turks, who had felt this burn on the tongue when they conquered the Portuguese colony at Hormuz on the Persian Gulf. My grandfather hated the Turks but loved the peppers.

Botanist W.H. Eshbaugh suggests that C. annuum var. aviculare, the chiltepín or wild bird pepper (so called because it is propagated by wild birds), is genetically the most related taxon to the domesticated C. annuum, the origin of which is to be found in southern Mexico.
The chiltepín has been used by the indigenous peoples of Mexico and the southwestern United States for centuries, and most of it, surprisingly enough, is still taken from the wild. For Native Americans, chiles, like corn, were gifts from the gods. The Papago Indians, according to Gary Nabhan, refer to it by a name suggesting that the chile has claim to have been present at the beginning of creation.
Hot chiles, according to a psychologist cited by food and science writer Harold McGee, may be the food of choice of risk takers. Eating chiles is a “contained risk.” The body’s responses to the capsaicin (the alkaloid concentrated mostly in the chile’s seed-bearing white placental tissue) — the vertigo, the shock, the burning tongue — can be enjoyed for their own sake, without any real risk, and then there’s that cooling endorphin afterglow.
The chiltepín has four times the capsaicin “per unit weight than do larger, domesticated chile varieties,” writes Nabhan. The chiltepín is hotter than the Japanese santaka, he says, and “39,000 times more powerful than what it needs to be for your taste buds to tell you that you are eating a chile!”
Yet people can’t have enough chiltepín. Forbidden by the U.S. Department of Agriculture to enter this country, chiltepíns make hot trade for smugglers. People still eat them pulverized and sprinkled on food in the manner of their ancestors 500 years ago. Although the chiltepín is found in southern Arizona, its consumption remains mostly local.
Fears remain regarding the chiltepín in the wild. Demand is high; often plants are damaged in the process of hasty hand- harvesting. Since the 1980s, some farmers in the state of Sonora, in Mexico, have been planting chiltepíns in fields, often starting plants from cuttings of wildings. It is hoped that these efforts will bear fruit of more than one kind. Perhaps domestic cultivation will take the heat off the wild populations of this red-hot mama.