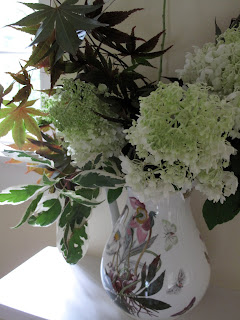 We are selling our beloved house in Northampton, Massachusetts. The one we said we would never sell. The one that has entered our hearts and will never leave. That one.

I clipped from trees and shrubs this morning, gathered the bits and pieces into this pitcher, snapped the photo while standing on a chair. The pitcher is on the living room mantle, on the left.

The foliage from a Japanese maple is from the tree in the backyard. We inherited it from the Nugents, from whom we bought the house, in 2001. Its green/bronze changes everything back there. The hydrangeas are from a tree also inherited from the Nugents — in bloom at this magical moment of hydrangeas. But our sole tree echoes the many in in my beloved neighbor’s yard — big, mature trees, a blizzard of white. I can see them now as I write from the dining table.

Sue’s trees were planted by her grandparents, in the 1930s. Her great aunt built the house, in 1924. Sue’s mother grew up in the house; Sue spent her life visiting it until she and her husband raised their own three boys in it. The eldest is off to college this month.

Sue’s grandparents and her mother knew Margaret Storrs Grierson, who lived in our house for fifty years, from the 1930s to the 1980s. Mrs. Grierson was a archivist who began, at Smith College, to gather primary material on women’s history, which forms the center of the college’s Sophia Smith Collection — one of, if not the first, archives on the subject in this country if not the world.

Mrs. Grierson changed the simple 1890s farmhouse. In the 1930s, she built a wonderful porch along the front of the house, which faces Massasoit St., changed the location of the front door, built a garage. Above the garage she added three small rooms, a fireplace and a bathroom. And a flight of stairs off the kitchen. (And when a carpenter was in the living room, working, a couple of years ago he said: “My great-grandfather worked on this remodel.” He meant the 1930s. He is a fourth-generation carpenter. This is New England.)

Our friends, Stephanie, and Ken (no longer married to each other), bought the house from Mrs. Grierson, when the aged lady was no longer able to negotiate the stairs. Their daughter Rebecca, our daughter’s age, showed up when we bought the house to collect from her childhood bedroom a scrap of wallpaper. She framed it.

We found an antique mezuzah in the garage and called Ken. It had belonged to his grandmother. He was deeply moved to put his hand on it once more.

You may notice a cutting from a red osier dogwood in the arrangement. I planted it when I built the front garden, right below the porch, in 2002. But last year, when everything, especially the river birch nearby, had crowded it, I moved the bushy dogwood to a back garden. It hasn’t quite decided if it is happy there.

I don’t know if this sale is going to happen. We are down to the last few days, a cliffhanger.

Mary Oliver wrote a poem called “On Losing a House.” Here’s a snippet:

We never saw
such a beautiful house