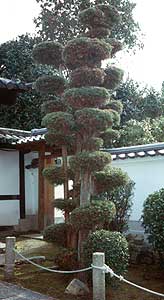 The art of the arborist outside the Abbot's Hall, Tofukuji, Kyoto

Insistence on individualism in the West is never so strident as in shaping thought about art. In garden design, as in landscape architecture, personalities and signatures are writ large, literally and figuratively — think of Le Notre in France; William Kent in England; Fletcher Steele or Frederick Law Olmsted in the United States.
The truth is that all art is collaborative. One person, as the landscape architect and writer Marc Keane has suggested, can’t be the representative of all cultural influences of an era, let alone the sole repository of talent in a generation.
On a trip to Kyoto, Japan in January 2002, never was I more aware of bringing individualist notions about art to another culture — an overlay best discarded if one is to understand what is before one’s eyes.

Zen temple gardens, built during the Kamakura (1185-1333) and Muromachi (1333-1568) period of Japanese history, are well known for their rock-and-gravel compositons, called kare-san-sui (dry-mountain-water). Yet the cultural influences behind what we see as raked sand representing water are complex, embracing the philosophical and spiritual ideas of their time

Among them is the concept that the very small and abstract is, in fact, the idea of the very great. It may well be that it is the very nature of this “small” that may strain a Western, especially an American, sensibility. Accustomed to seemingly limitless space, where individuals spread out and mark the landscape as they please, a Westerner needs to grasp the geographic reality of this small island nation. Seventy-five per cent of Japan is composed of mountains, 15 per cent slope, and what is left contains the bulk of 127 million people on mountain valleys and coastal plains.

The constrictive nature of the landscape was a primary force in shaping the development of Japanese culture in general, writes Marc Keane in his excellent and useful book, Japanese Garden Design (Charles Tuttle, 1996. Make sure to read his first chapter on the history of the development of the Japanese garden in general.) Zen Buddhist temple gardens are highly symbolic, highly constructed works of art intended to be looked at in a painterly way. Many are based on the rage for all things Chinese among the elite in 13th-century Japan, especially for the new Zen Buddhist religion.

The idea of the “Japanese garden” — a phrase so easily rolled off the tongue of a Western visitor — is really a 1,500 year tradition broadly influenced, as any cultural force, by geographic, economic, political, religious, and artistic realities along the continuum of history.
The shift of political power from the aristocracy to the warrior class and the accompanying rise of the Shogunate marked the Kamakura period. According to Keane, gardens were built in the narrow confines of warrior residences and urban Zen temples. But it was in the next era, the Muromachi, that the shoguns and the Zen temples supported the arts — the Noh theatre, poetry, as well as the art of the garden — during a great burst of economic activity in Kyoto. 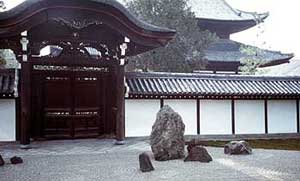 The kare-san-sui garden compositions of gravel, dark rock, white sand, and deep green plants developed into a classic form of small courtyards dedicated solely to sculptural gardens in the late Muromachi. The ideal of this form of garden design was to reach beyond anything superficial or ornamental to the greater truths within; the gardens were stripped down to the essential. Keane writes, The rather sudden creation of contemplation gardens in the kare-san-sui style is one of the great creative leaps in Japanese gardening history.

The use of large rocks in gardens, however, was already a highly developed art in Japan, codified in the eleventh-century Sakuteiki — essentially, a book of rules as to the disposition of stones and other elements in the art of garden-making. Likely written by Tachibana no Toshitsuna, who died in 1094, the advice in the Sakuteiki went beyond the aesthetic. Water must flow east, then south, and to the west, for example; otherwise bad luck would befall the household. Beside the study of water, the treatise was quite specific as to the use of stones.

Make sure that all the stones, right down to the front of the arrangement, are placed with their best sides showing. If a stone has an ugly-looking top you should place it so as to give prominence to its side. Even if this means it has to lean at a considerable angle, no one will notice.

Square granite slabs in a sea of moss suggest paddy fields but are here a formal design element. This garden . . . appeals to modern tastes without representing a complete break from the past. The spacing between stones is deliberately irregular, and at the border of the plot where there are larger plantings, thins out as a means of linking the two zones.

Priests who built gardens in the Kamakura period were known as ishi-tate-so, “rock-setting priests.” By the Muromachi period, the term was used mostly in reference to Zen priests, who labored to make gardens for the elite warrior class to provide financial support for their own temples.

Tokukuji in the eastern section of Kyoto was founded in 1235. Like all narrow gardens surrounding Zen Buddhist temples (Tofukuji, one of the five great Zen temples of Kyoto, belongs to the Rinzai sect), the garden around the Abbot’s Hall (Garden of the Hojo) are to be explored by sight and mind, not by body.
The southern garden — the “most contrived” according to the Japanese garden scholar Teiji Itoh — is composed of four rock compositions symbolizing the Elysian islands placed on sand, which makes up the garden floor. The sand is raked symbolically to represent eight rough seas. In the right corner are five moss-covered stones, “sacred mountains.”

In the eastern garden (that is, like all the “gardens” is really a border on one side of the Hojo) are seven cylindrical stones arranged on a moss field to represent the Great Bear of Heaven. (These stones were once used in foundations elsewhere in the temple.)
To the west of the Hojo, azalea shrubs are trimmed in a checkered pattern in imitation of “Seiden,” a Chinese way of dividing the land. Azalea bushes are elemental in kare-san-sui gardens, and are most often carefully trimmed close and rounded as to appear as eternal and immutable as stone. The Japanese use other evergreen shrubs and trees for similar reasons — almost unending beauty. Flowering trees and their fickle show are kept separate. (We saw some at the entrance to temples, for example.)
These austere gardens may seem monochromatic to the Western eye more accustomed to the rioting of flowers. But the green, gray, and silvery notes of these gardens are rich, deep, and surprisingly complex.

In 1939, the famed garden designer Shigemori Mirei added a section to the northern garden at Tofukuji, a composition of square-cut stones and moss. Celebrated and photographed to the point of exhaustion, the actual garden, nonetheless, is a fresh and interesting delight. Mr. Itoh has written:

In Mr. Shigemori’s garden corner at Tofukuji, the play of geometry is reminiscent of the liveliness of the paintings of Paul Klee. It’s as if moss and granite on the ground are simply more elemental than the crushed minerals of paint on canvas. But this is softened geometry, with the swelling of the emerald moss as an organic foil to the hard-edged granite. I felt as astonished when we turned the sharp right corner at the Hojo as if we had discovered a miniature room designed by Le Corbusier. Mr. Shigemori has choreographed a square dance of sleek emerald and coarse stone, an unending pleasure. 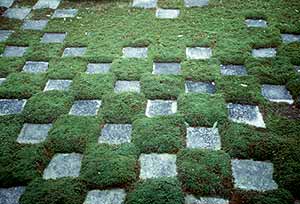 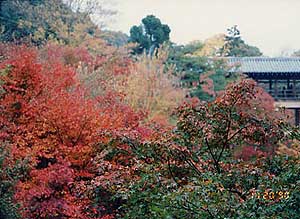 As famous as Mr. Shigemori’s tiny jeweled composition is among garden lovers, Tofukuji is likely even more famous for its autumnal display of every nuance of red. This is when thousands of visitors crowd on the Tsutenkyo Bridge (elsewhere in the temple complex); a January visit may lack the great show of maples, but we shared the gardens of the Hojo with no more than two other enthusiasts.

An annual event on November 23 at Tofukuji is Fude-kayo, a memorial service for writing brushes. It’s important here, too, to shed one’s Western ideas about inanimate objects. Words have spirit, according to traditional Japanese culture. Why not the instrument sweeping these small gods from the mind onto paper?