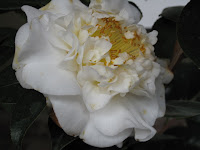 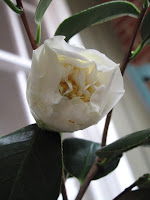 In January 2002, during a trip to Kyoto to visit Zen Buddhist temple gardens, I fell in love with the shy-blooming (at least in that very cold winter month) lipstick-red camellia. I was stunned by a the sight of a single flower on a simple stone, placed by way of reverence.

I had never lived in a camellia climate until coming to Los Angeles, three years after Kyoto. Our rented 1928 bungalow’s small, shallow porch is hedged with four camellia bushes, two pink-blooming, two red. I would guess them to be 40-50 years old. The hedge is an embarrassment of riches all winter — and there is a Southern Californian winter, though I wouldn’t have believed it.

So at the Huntington Botanical garden’s moment of camellia celebration (Feb. 14 & 15), I bought a white-blooming hybrid beauty, Camellia japonica ‘shiro chan’. I was attracted to the tremulous beauty of its bloom — reminiscent of certain white-blooming peonies.

The plant originated at Nuccio’s Nursery in Altadena, growers, since 1935, of rare azaleas and camellias. Shiro chan, according to the Camellia Society web site, means “white child.”

I will be taking this pearly-blooming child to a new L.A. garden next month, less than four miles away.